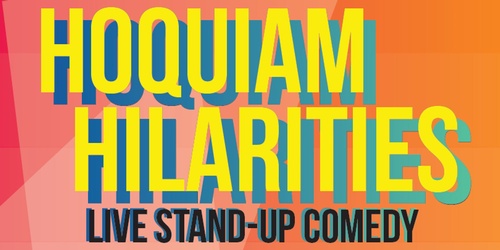 The August Edition of Hoquiam Hilarities at Hoquiam Brewery is coming up fast! Get your tickets soon!

It's almost time for the August edition of Hoquiam Hilarities! This time around they've got a stacked line-up with Travis Nelson hosting, Bo Johnson featuring, and Susan Jones headlining!

Bo Johnson has been featured on Nick Cannon's Wild N' Out, Kevin Hart's Hart of the City on Comedy Central, and Kevin Hart's Gala at the last Just For Laughs Festival in Montreal.

Susan Jones is a recent bride, dog lover, Pez collector, single mom, strip club DJ, and survivor of the 80s and 90s. Susan reached almost 600 lbs. and in 2016 started her weight loss mission. She has lost over 200 lbs. so far, and takes you with her on this journey every pound of the way down. Susan has opened for Dana Carvey, Rob Schneider, Brad Garrett, Jeffery Ross, Rick Overton, Chad Prather, and many more.

Susan recently released her first half hour network special on RideTV. She has also appeared on Up Late NW and JokestersTV. She has recorded a stand-up album called 50 Shades of Gravy. Susan was a regional finalist for NBC Standup, and has won the Hard Rock comedy contest and JackFM’s Funniest Comedian in Washington.